morgan August 14, 2021 Comments Off on Magnetic separator: principle of operation

The modern sphere of waste management cannot be imagined without the use of separation equipment. The main task of which is to separate various impurities, hazardous particles, and valuable materials from the total mass of the waste.

The use of the metal of the collecting equipment makes it possible to effectively separate iron-containing particles from the total mass of waste using a magnetic field. In addition, the operation of Magnetic separators prevents damage to equipment used for sorting and processing waste – shredders, crushers, presses, etc.

To make it easier for you to make a choice, consider the types of magnetic separators and their principle of operation.

What are magnetic separators?

Iron separators are actively used at waste sorting and processing plants. Depending on the type and morphology of the processed waste, different technologies can be used for separation, using magnets of the required classification. Let’s consider their distinctive features.

Differences depending on the type of material to be cleaned
– Separators for wet concentration, used in the selection of non-magnetic particles, in a highly magnetic mass;
– Dry separation devices are used when cleaning materials from strong magnetic impurities, to refine ore concentrates.

The principle of operation of iron separators, regardless of their design or other differences, consists in the use of magnetic field forces, and the separation from the mass of inert materials of compounds that contain metals. A magnetic field is created in the working area of ​​the iron separating device, with the help of which metal fractions are instantly released from the total mass of MSW, construction waste, plastic waste, cullet, etc. Let us consider the operation of magnetic separators using the example of three types: drum, supra-belt, and eddy current.

Drum-type separation equipment is represented by a cylindrical rotating vessel with a powerful magnet inside. The waste is placed in a drum, which starts to rotate under the action of an electric motor. Metal particles are magnetized to the drum surface, while the mass free from metal impurities is poured out and directed further along the conveyor belt. Most often, drum-type separators are installed at the outlet of the vibration compartment. The use of a drum separator is important for wet and dry cleaning, the equipment can work with small metal particles up to 3 mm.

Suspended or over-belt models consist of an electric motor, belt drive, power supply, and magnetic plate. The position of the magnet is adjusted using the power supply. The equipment is placed over a conveyor belt along which the waste moves. Under the influence of the created magnetic field, metal fractions are attracted from the total mass of waste to the plate. Gradually, along the movement of the separator belt, metal inclusions move to the edge and fall into the trays, leaving the coverage area.

The main difference between the work of eddy-current iron-separating equipment from the previous types is the ability to separate non-ferrous metals from the total mass of the waste. The magnet in the eddy current separator is located in an inductor that generates an alternating current. The operation of the magnetic inductor is started by the electric motor.

Due to the created MF, eddy currents (Foucault currents) are formed inside the non-magnetic components, which help to create an alternating MF around metallic non-ferrous materials. As a result of the interaction of different streams, the necessary components are allocated. 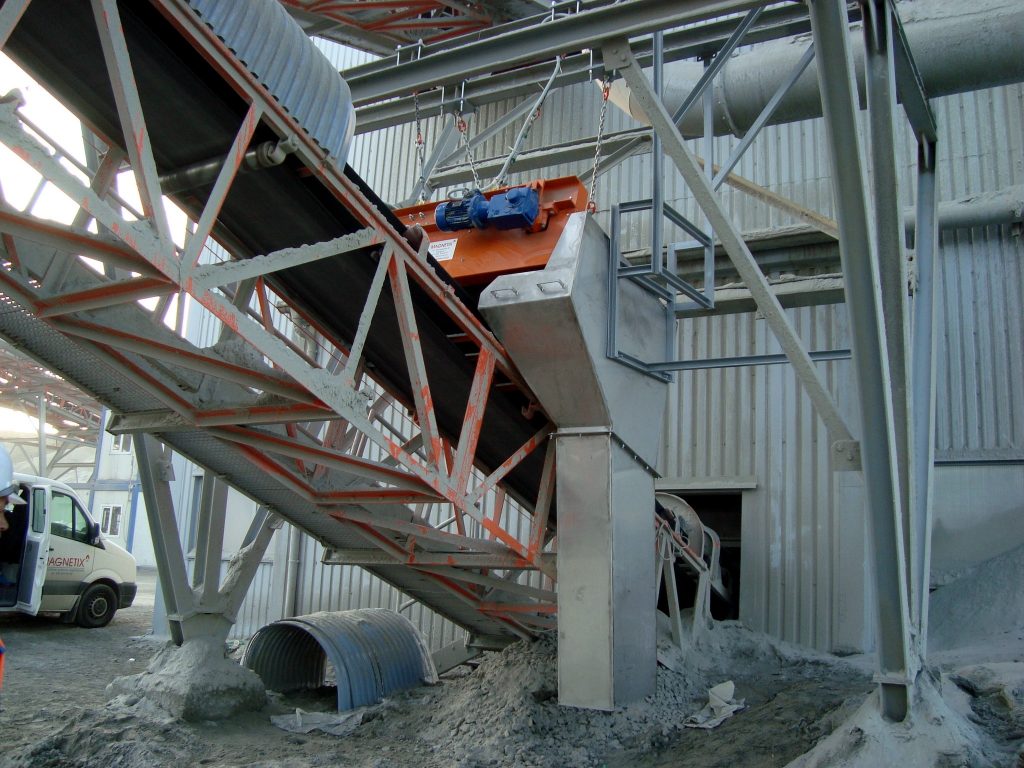 How to choose a magnetic separator

The choice of equipment depends on many factors, among which the specifics of the operation of the enterprise, the type of raw materials to be processed, and the components that are planned to be separated from the total mass of waste are important.

The equipment presented by Netmus is distinguished by its durability and stability in operation. The company’s specialists are engaged in developing, supplying, and installing waste processing equipment, including magnetic separators.