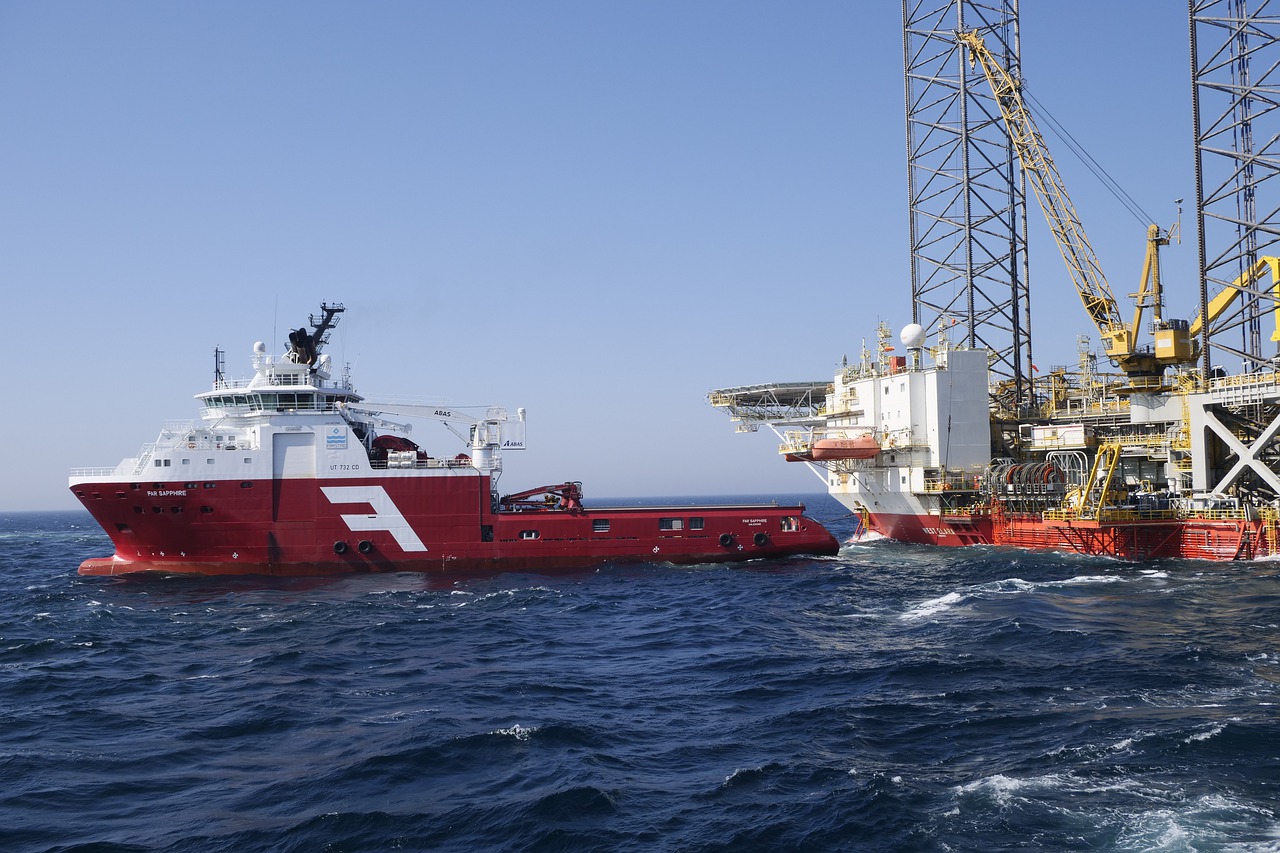 The exploitation of hydrocarbons (oil or gas) in the open sea is offshore exploration. It is operated from platforms, fixed or floating anchored at the bottom of the sea. A platform supports the devices necessary for the various phases of drilling or extraction of hydrocarbons and sometimes equipment intended to ensure a human presence on board. Some platforms also make it possible to transform the extracted hydrocarbons so that they are easier to transport. In addition, it is possible to store them on floating units temporarily.

– Seismic search for deposits:
One or more seismic vessels are firing a series of air cannons behind them. These suddenly discharge compressed air at high pressure into the marine environment in order to cause a seismic wave propagating into the seafloor. Depending on the type of rock encountered, these waves are more or less reflected and rise more or less quickly to the surface. These echoes are then picked up by ultra-sensitive microphones, most often also fired by the seismic vessel. Computer processing makes it possible to restore a three-dimensional synthetic image distinguishing the shape of the different geological layers but also the nature of the rocks, their porosity, and even the fluids they contain.

– The exploration phase:
When a deposit is detected, engineers use a floating platform. Generally equipped with a derrick (tower supporting the drilling device for a hydrocarbon well) and a drill bit (cone-shaped drilling tool for breaking rocks), it is used to drill the floor marine. It makes it possible to check whether there is enough oil in the tank to start its exploitation. To control the pressure, a dense “mud” is injected into the borehole, which also makes it possible to raise the cuttings to the surface and cool the drill bit. After several weeks, valves are fitted at the wellhead, and the floating platform is towed by ships to another site. If the deposit is considered profitable.
There are many challenges involved in this stage of exploration, such as- oil exploration safety.

-The operating phase:
The tubes or hoses, allowing the hydrocarbons to rise, are connected to the boreholes. A series of valves and manometers (instruments used to measure pressure) then let the desired flow rates to be refined more precisely. After several years of operation, the pressure begins to decrease in the well. Another liquid under pressure is then introduced into a peripheral well. This liquid, often water, has the role of pushing the remaining hydrocarbons upwards and thus making it possible to complete the operation.

While offshore has significant potential, it nevertheless faces substantial constraints in terms of safety and costs (a central problem when oil prices drop).
About 20% of world oil reserves and 30% of natural gas reserves are currently located in the seabed. Offshore offers large access areas to new oil reserves, alongside oil sands or shale oil deposits. Land reserves are most often exploited by the national companies of producing states, such as in Saudi Arabia, Russia, or Mexico. It is, therefore, in the offshore areas that the oil companies have made most of their major recent discoveries.

Getting Your Business Ready for Opening Day

Top Reason why online shopping is better than offline

4 Things People Will Notice in Your Waiting Room

What To Consider When Hiring Professional Welding Services